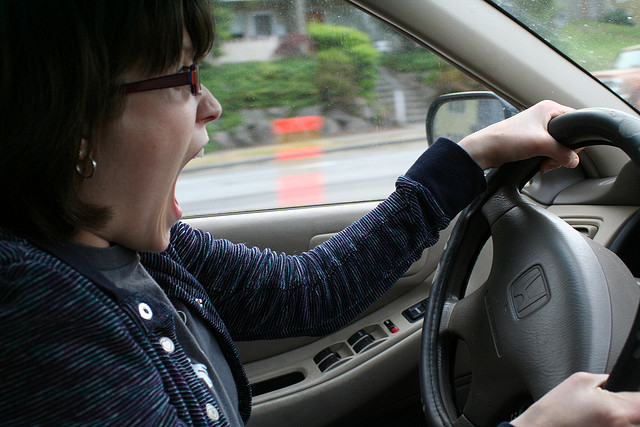 image courtesy of <a href="http://flickr.com/photos/kfo">kfo</a> on flicker

Yesterday I was driving in LA traffic. I was coming home after teaching my class at RA MA in Venice. I decided to take side streets to find an alternate route, maybe to avoid traffic, but alas this is LA and traffic is freaking everywhere.

I was coming down National where the two lanes go into one. I looked in the rearview to see if I could merge left and there was a big gap because the guy there had spaced it or maybe he was just texting, I don’t know.

I went ahead and pulled over into the left and just as I did, I heard a blaring horn and screeching tires! I looked behind and there was this guy in a little GTI in the process of slamming on his brakes. I’m not sure what happened. but he wanted to get past me, that’s for sure. He seemed to come out of nowhere. Now as I looked back he’s shaking his middle finger at me like he wants to kill me.

First and foremost I’m a fighter so I get on guard, watching this guy in case he pulls a Jack Nicholson and jumps out with a golf club at the stop light. So I am staring in the rearview at him. I have to note to you that I am really, really mellow at this point because of the class I just taught. I’ve been singing Mantras in my head all the way home because it was reverberating from the class. Now I am on guard, watching this guy go psycho in his car. I switched over to a mantra of protection as I watched the guy surge in frustration again and throw up both middle fingers at me and shake them.

Then I just start to feel bad for him. The guy is really frustrated. He’s like a caged animal, there in his car. I know what that feels like. I think we all do. He has nowhere to go, the car isn’t moving, his frustration builds again and he shakes his middle finger at me one more time. I still don’t know what I’ve done. When I pulled left there was this big gap in the lane and I had my blinker on. Maybe that was the guy who spaced it and he was pissed off that I slipped in front of him, another in a line of cars merging into the one lane in shitty LA traffic. Maybe he’s on drugs, pharmaceutical or otherwise. These days it doesn’t matter.

I feel bad for the guy though– all this kundalini yoga is working on me. The heart is an amazing thing… it’s actually the source of all strength, not weakness and the soft underbelly as we’ve been told. It’s the strongest place to be if it’s real and developed. Now I just start shooting the mantra at him– projecting it at him like I would a friend, or someone I cared for who was going psycho and needed a hand. It worked… I think. He stopped shooting me the finger and then the next time the frustration built up to explosive proportions, he raised both fists in the air and shook them. He obviously had somewhere to be and the traffic was driving him out of his gourd.

Anyway, the point is that I am seeing this more and more. People are going out of their freaking minds in this new technological-aquarian age. Everything has sped up with technology. The mind was designed to interface with the soul so you can access the infinite nature. So, the mind has an infinite capacity. That means, if properly directed through meditation practice, the mind can bring you to your infinite nature and you can become super-human. Trouble is the mind can also spin in a million different directions as well and make you infinitely frustrated and off center. I don’t know what this guy’s deal was, but he was clearly really fucked up under the pressure of the time.

This is the world we live in now, folks. The earthly and celestial energies of our solar system have aligned and are blasting us with a higher frequency of energy. It’s as simple as that. One of the benefits of this higher frequency is the advance in technology. Many more things are now possible than ever before, but the downside is that if you do not have a capacity to conduct and direct this energy through your mind-body computer it will fry your system. This is the aquarian age and it’s just going to get deeper and more intense.

There’s no two ways about it. People have to meditate and learn to control the mind if they are going to be able to cope in the world that is evolving rapidly before us, within and without.

You’ve got to have a practice. You’ve got to plug in and get the download from your universal computer daily, you’ve got to connect to your soul. Otherwise you will become dis-connected and you’ll explode like this poor guy behind me in the car.

I sent the guy a prayer for his peace of mind and then I turned off of National early in order to take a back street home. For one I wanted to go where there was no traffic, but more so wanted to get away from that guy in case he was packin’. You never know.

How to make homemade yogurt