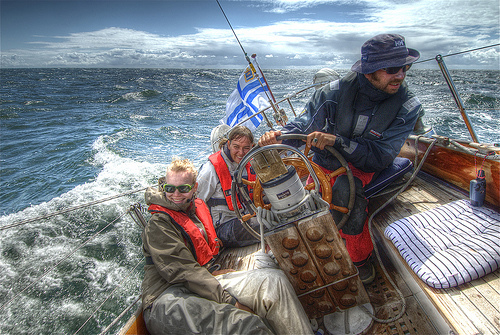 SET A COURSE AND SEE IT THROUGH

Imagine that your life is like a big ship.  It takes a lot to maintain and sail that ship.  When you steer your ship, it has to be done with certain calculations and planning in order for you to set a course and stay on that course to get where you’re going in your life.

So one has to map out where they want to get to then constantly readjust.  Each new day brings new circumstances and information like changes in weather, wind or sea conditions. Just like life, each day brings new things that must be contended.

IT’S OKAY TO MAKE A FEW STOPS ALONG THE WAY

Sometimes to get to that ultimate destination we have to stop along the way.  Maybe it’s for food, fuel or supplies or simply because we’ve gotten lost, but often there are stops along the way.  That’s fine and it’s to be expected.  We have to have patience though, because getting to our ultimate destination can be a long trip sometimes.   You have to enjoy sailing.  It helps if you’re enjoying the trip.  If not then try.  Try to appreciate the things you experience along the way.   Sun and wind burn included.

CAN’T SEE THE OCEAN FOR THE TREES

One of the problems we face is that after we set out for some distant shore,  once we’re out on the ocean, it’s all ocean for a while.  Nothing but ocean and we’re unable to see the next destination for that vast ocean is the only thing around.  This can be very disorienting.  Getting up and going to the same job everyday can be like being out on the ocean.  Sometimes you forget where you set out for.

When this happens it’s natural to doubt the course.  It’s very easy to doubt the planning that was done along the way.  After all, at this point all you’ve got is the big ocean in front of you, the ship and the course that you’ve set.  That’s when we start wanting to change course.  A new destination becomes more attractive than where we were going.  Suddenly we’re convinced we can get there quicker if we change things up a bit… and so we start to steer the ship in a new direction.

Our lives are like big ships and it takes a lot to steer them. There are so many factors going on in our lives, seen and unseen, that changing course changes all of those things.  It’s no small thing to steer a big ship. Every time you change your course because you doubt where you going or where you are now, you change everything about the trip you’re on.  This also affects everyone on the ship.  That is why you have to see things through. Have patience.

Some people are good at staying the course, but for other people, it becomes a lot of jerky steering and that takes you on a pretty rough ride.

THE FIRST ONE WAS THE RIGHT ONE

When I was in the army, often on training exercises I was leading a whole battery of men and equipment.  120 plus men plus dozens of vehicles and I was at the helm, navigating.  When the pressure is on like that, time and distances and landmarks start to become different.  The mind, under pressure tells you that you’ve gone too far down one dirt road.  Maybe I should’ve turned back there. The terrain isn’t an exact match to the map.  Maybe I haven’t gone far enough.

The thing about having so many people and such a large cache of equipment depending on you is that if you mess up, it’s a big deal.

The biggest lesson I learned from those situations was to stay the course and trust the initial plan and initial impressions I had.  Trust your gut.  It was true every time.  I stayed the course and the landmark appeared to let me know  I was on course.  I waited instead of hesitating under the mind’s pressure and the next turn appeared.

It’s the same for the individual life.  You’re generally right the first time.  Trust your gut and stay the course and you’ll get there.  Stick with your decision until you’ve seen it through.  And don’t jerk the ship around by changing course every day.

Lessons from H.H. The Dalai Lama: It’s Your Love, Don’t Lose it

Why do Teacher’s Training?