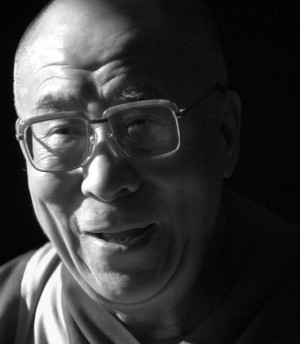 I saw the His Holiness The Dalai Lama recently in Los Angeles.  My wife sent away for tickets well in advance and we were lucky enough to get them.  On Saturday, before he did the Medicine Buddha Initiation, he took some questions from the audience.

One of the questions was along the lines of:

“In practicing non-violence, how do you deal with someone who is trying to do you harm or acting negatively toward you.”

The Dalai Lama’s response was very interesting.  He said that you have to separate the action from the actor.  It’s perfectly fine to defend yourself against the action but you must not lose your compassionate regard for the person doing the action i.e., the actor.  I thought this was a profound and amazing distinction.  It takes incredible discipline to maintain that kind of compassion when under attack and uphold the realization that we’re all one– cut from the same cosmic cloth.  Love thy enemy, but you don’t have to love the idiotic crap he’s pulling on you.

It reminded me of a story that my teacher, Harijiwan tells often.  The Dalai Lama gives an audience to any Tibetan refugee who makes it over the Himalayas into India.  This one particular monk had been imprisoned and tortured for many years and finally made it into exile.

The Dalai Lama asked him, “What was your greatest challenge while you were imprisoned?”

The old monk responded:  “I was afraid I would lose my compassion and love toward my captors.”

Harijiwan added, “because you see, it was his love to lose.”

Think about that.  There’s the lesson of the millenium: “It was his love to lose.” He had achieved a state of mind that viewed the whole world with love.  He earned it.  He had more to lose than his captors, who were clearly taking the low road.

Now most of us are going to take a while to get there.  It takes a lot of training and discipline and practice to maintain such a state of peace, but what this old monk knew was that it was his peace of mind, his love, his compassion, his connection to the flow of all that is, which he would’ve lost by stooping to the level of his captors.

Add in the fact that he was being physically tortured and forget it.  Who among us could do it?  Think about this one the next time your boss is being a dick.

Just remember when you’re fighting with someone or someone is clearly out to do you harm, that this other person is you in another form.  Stop the action with counteraction, but remember that you work hard for your peace of mind and if you “lose it” over something, it’s you who’s lost it.

This might not take hold right away, but it’s worth practicing.  You’ve got this whole life ahead of you and you can have peace and you can have a good life– and that’s where the fight is.  It’s with yourself, not with the world out there.  The fight is inside, to get to that state where you can be at peace and come what may, nothing can shake you.  Not even torture.  Can you imagine that state of peace and that strong a connection with the eternal love?  Holy shit!  I can.  I can imagine it.  I’m not sure I’m there yet, but I want to be.

Being Who You Are

Break Out of The Cocoon and Spring into Transformation

Can A Human Be Greater than God?