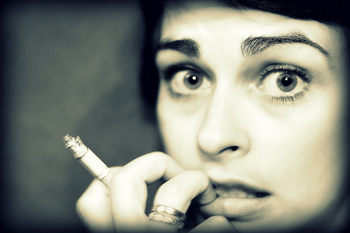 Everybody wants to change themselves for the better. It’s a natural human inclination to want to go higher. So why is it so hard? Why are some people able to change while most others suffer their habits, constantly pulled into routines that make them unhappy?

When you set out to change something in your life, you wake up ready and full of fire.

Most people, after a few days, weeks or months, find that the habit returns. The next natural reaction is to get discouraged and engage the negative mind, beating oneself up–

This is a vicious cycle that just reinforces the mind’s hold on the soul.

“Until one is committed, there is hesitancy, the chance to draw back, always ineffectiveness. Concerning all acts of initiative and creation, there is one elementary truth the ignorance of which kills countless ideas and splendid plans: that the moment one definitely commits oneself, then providence moves too. All sorts of things occur to help one that would never otherwise have occurred. A whole stream of events issues from the decision, raising in one’s favor all manner of unforeseen incidents, meetings and material assistance which no man could have dreamed would have come his way. Whatever you can do or dream you can, begin it. Boldness has genius, power and magic in it. Begin it now.” –Johann Wolfgang Von Goethe

IT’S ALL IN YOUR MIND, KID

Thoughts are powerful things. Even though you can’t see your thoughts, you know they exist because you experience them. In fact, you experience 1000 thoughts with each blink of your eyes. Only it’s so fast, and most of those thoughts are so subtle, that you only register a few of them consciously. This makes it hard to get a hold of them, let alone change them.

Thoughts are actual things– electrical impulses, in fact. And when electricity is flowing, it creates a magnetic field of energy. So all these chains of subconscious thoughts create a magnet of energy. It’s that magnet of energy that allows your habits to keep a hold on you.

FRIENDS OF A FEATHER FLOCK TOGETHER

Your most frequent thoughts cluster together into thought-patterns. This creates a magnetic pull that is the basis of a habit. The thought patterns hold your mind hostage and backed by emotion, they trigger behaviors. So whenever a thought enters your mind that is closely related to your habit, it can trigger an avalanche of subconscious thoughts which trigger the established thought-pattern and viola! You’re back in the grip of your habit.  Even your thinking becomes habitual.

Take smoking for example. Let’s say you smoke in social situations. You may not even notice it, but being shy or uncomfortable around strangers might be what triggers you to smoke. All your thoughts and insecurities are tied to that behavior of smoking, which then links you to the habit. The habit becomes addiction when the substance, nicotine, gets into the cells and the body becomes dependent on it. Then you have a physical reaction if you don’t consume nicotine.

The current problem in treating addiction is that it’s almost always done on the physical level. Many people quit one addiction only to fill the hole that’s left by it with another addiciton. That’s why you’ll see so many people at AA meetings drinking coffee and chain smoking. The energy is just ends up going to a different addiction.  To truly tackle change you have to work on the level of the mind, which is the energetic level and you do that with intention.

THE POWER OF INTENTION

To beat habits and addictions and to manifest real change, you have to leverage the mind, which is constantly processing your thoughts and giving you your perceptions and experiences of this life.

When you decide to change yourself you are setting an intention. Intention is an impulse of your soul – it’s an aspect of the psyche that allows you to use the source of you to create your life and make it manifest. It gives you inspiration. Intention is powerful. It’s how all change is made manifest.

When you decide to make a change, the whole universe lines up to back your decision because you are in this body, on this earth, to manifest yourself. How you do that and what your manifesto is, is completely up to you. Intention is like a shiny new sports car – you get it and you’re all excited that it will get you where you want to go… and fast.  There’s only one problem.  The new car doesn’t have enough gas.

WHY IT’S SO HARD TO CHANGE

Your habits already have energy because they’re backed by lots and lots of subconscious thoughts. Not only that but they’re well established. They’ve got behaviors all set up and inter-twined and some of these behaviors, a good many of them, are actually addictions.  Addictions further the hold that the habit has on you by linking it to a material substance. It doesn’t matter that you don’t smoke or drink or do drugs. Almost everybody has  some form of behavior that they’re habitually addicted to. Some people seek constant approval, some are after sex, others go for shopping or food.

“No matter what your habit, custom or addiction, you have one thing in common with everyone else:  you want to make yourself a little better by not doing whatever it is that slows you down from doing what you really want to do.”

IF YOU’RE GONNA GET ANYWHERE IN LIFE, YA GOTTA PUT GAS IN THE CAR

Intention gets you down the road a ways, but most of the time, something goes wrong and the habit ends up coming back. You need to put energy behind your intentions, because the new intention has to have the power to change the current structure of the mind.  When the new healthy intention is strong, it will cause the competing habits to fall away.

I used to smoke and I enjoyed it some of the time. Most of the time though, it made me feel shitty and I wished I could get away from the habit, but I always found myself going back to it. I knew one thing though: one day I would change. I had a belief that one day the habit would just fall off and I wouldn’t want to do it anymore and that’s pretty much what happened. I got into yoga and smoking didn’t mix well with the practice. After a while I added more and more yoga and I felt better and better. I simply lost the desire to smoke. What really happened is that Kundalini Yoga magnified my energy. So my higher intentions were empowered by the increased energy brought about by the practice.

IN WITH THE NEW, OUT WITH THE OLD

The idea is to start putting as much energy behind your new intention as possible. Your intention needs to become more powerful than your habits are for at least 40 days.  Then the old habit breaks it’s hold on the mind, while the new intention flourishes.

I remember my grandfather deciding to quit smoking. He was in his 50s, a blue-collar worker, he refinished wood floors for a living. He was a tough old guy. One day he came home from work and as he walked up the steps to the Bronx tenement apartment we lived in on the fourth floor, he found himself severely out of breath for the first time in his life. So, that day he decided to quit smoking. He set his intention and in order to reinforce that intention, he put some energy behind it. After each cigarette he smoked, he would chew on the ashy butt to give himself a distaste for the habit. This is an extreme way to go, but it’s an example of putting energy behind intention to overcome the established energy of your habit.

The bottom line is that change is entirely possible but you won’t get it from reading a book or watching a DVD.  How can you change the mind when you’re using it all the time? You can’t, really. At least not forever. You have to have a way to leverage the mind. You have to do something to back it up your decision to change.  You have to put energy behind your intention and make it solid so it can go up against the negative forces of resistance that the mind throws at you.

Kundalini Yoga is my game. The exercises and meditations in Kundalini Yoga allow you to tap into pure energy at the soul level and that is why it is so powerful in effecting change. It puts great energy behind your intentions.

SAT KRIYA: How To, Tips, Tricks and Finer Points

Another Boot Camp come and gone

102 Things you can do to realize your destiny